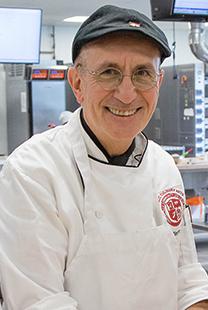 Chef Pierre has been teaching at Long Beach City College since 2003, when he started the Baking & Pastry Arts Program.  He also opened the LBCC student-run Bakery in 2015 and teaches several of LBCC’s Baking and Pastry courses. Before coming to LBCC, he spent three years teaching Baking & Pastry Arts courses at the Art Institute of Los Angeles.

Prior to his switch to Teaching, Chef Pierre spent 25 years in the Hotel and Restaurant industries. A native of France and a fourth generation Baker, Chef Pierre began his apprenticeship at the age of 15 and worked his way through the Culinary ranks, eventually becoming the Executive Pastry Chef in many establishments around the world, including: ‘The Phoenician Resort’ in Scottsdale, Arizona; the ‘Hyatt Regency Resort’ on the Island of Aruba; the ‘Lyford Cay Club’ on the Bahamian Island of New Providence; as well as at ‘Tavern on the Green’ in New York City’s Central Park.