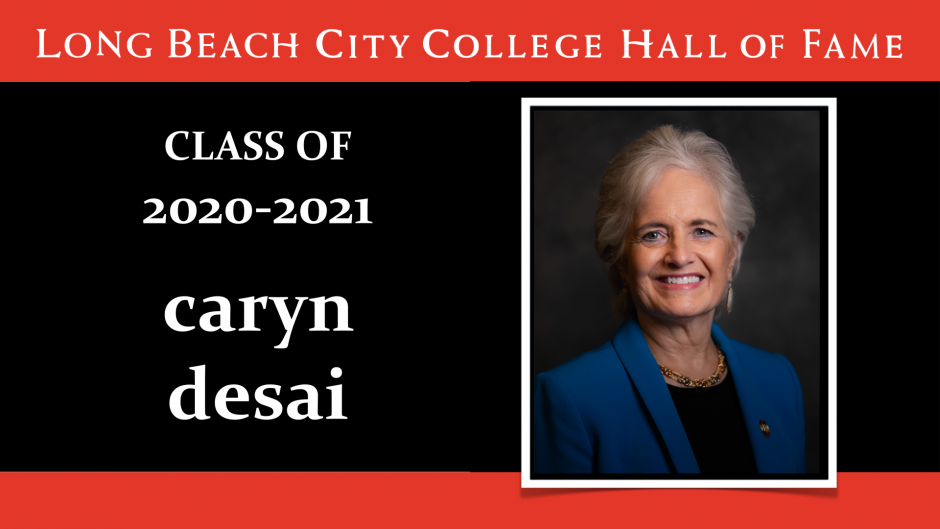 As an actor and director, caryn desai is no stranger to a good story. caryn’s story is one of fierce independence and a drive for education. Born in Camden, New Jersey as one of six sisters, that independence was necessary for her to find herself and discover her passion for the arts.

At 15, caryn began working at the Camden Main Library and started a story hour, her first time bringing arts programming to children. It would not be her last.

At 29, caryn struck out on her own in search of her dreams and new opportunities out west, moving nearly 3,000 miles from New Jersey to Long Beach. Once she’d reached her new home, the decision to start at Long Beach City College was an easy one – the College was accessible and affordable, allowing her to pursue her dream of higher education while juggling the responsibilities of work and life as a single mother to her two daughters, Tammi and Kristen.

A 4.0 student at Long Beach City College, caryn quickly rediscovered her passion for the arts, theater in particular. Professor Shashin Desai, the department head for theater at the time, recognized that drive and provided caryn with her first opportunity to direct.

After LBCC, caryn’s fierce independence once more pushed her forward in pursuit of her education, travelling across the world and earning certification from the Royal Academy of Dramatic Art in London. Upon returning to her new home in Southern California, desai enrolled at CSULB for a BA in Acting and Directing and earned a 4.0 GPA there as well. After that? caryn enrolled in UCI’s competitive MFA in Directing program as the only woman in her graduating class of four.

While finishing school, caryn began teaching at local colleges, LBCC among them, and found herself working with her former professors as a colleague. Shashin Desai asked her to help with his project, the International City Theater, which was housed at LBCC’s Liberal Arts Campus at the time. caryn jumped at the opportunity, volunteering at the beginning for experience and later helping to shape the direction of the organization.

In 1997, caryn and Shashin married and the two brought International City Theater into the spotlight – turning ICT into the resident professional theatre company for the City of Long Beach. As the Artistic Director and Producer for ICT, caryn has helped create 6 educational programs, including classroom appearances for 3rd grade classes at LBUSD, internships, programming for seniors, and free Saturday performance to allow all families to experience the theater together.

Click here or on the image above to view caryn’s induction video.