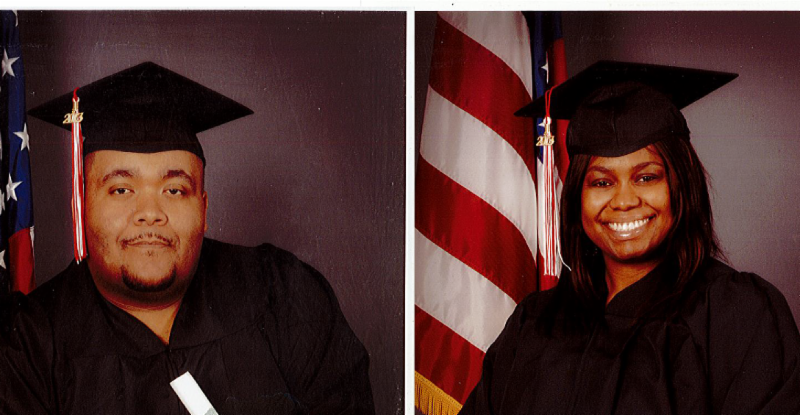 Charles and Kisha Singleton have the kinds of success stories we all love to hear about. Both are Long Beach natives, with Charles coming to Long Beach City College from Poly High School and Kisha from Lakewood High School. Both are self-made, having worked hard to earn the success they enjoy in life. Both are generous, diligently giving back to their community. Both are Vikings.

After he graduated from high school, Charles went to a local trade school to learn graphic design. Shortly after that, he met Kisha. “She always wanted us to further our education – she made a goal to complete an Associate’s degree in Criminal Justice and inspired me to do the same.” It was clear there was more to the story, but Charles was deferring to his wife – it was her story to share. “In 2001, shortly after we started at LBCC, I was diagnosed with Multiple Sclerosis.” The National Multiple Sclerosis Society describes MS as an unpredictable, often disabling disease of the central nervous system that disrupts the flow of information within the brain, and between the brain and body.

“We persevered. Both Charles and I were working full-time and raising our daughter, and the MS made classes so much more difficult for me. But we each earned our Associates Degree in Criminal Justice, and it’s one of our highest achievements.”

Kisha is working on a book to share her story with MS to serve as a guide for those who are recently diagnosed and their loved ones. “Over the past 18 years, MS has affected just about every part of my body and my life. What I’m trying to give people is an understanding of what could happen, so if they wake up blind because the muscles in their eyes don’t work, or unable to speak because their brain can’t communicate with their tongue they already have a plan in place with their loved ones. Every time something new has happened, I try to keep track of the things I wish I’d known, so I could have been prepared.”

Generosity runs in the family. Despite earning his degree in Criminal Justice, the courses Charles says most impacted his life were Library 1, and public speaking and debate courses. “They were all pieces of the puzzle that led me to develop TreImage into what it is now – I’ve built my career around the skills I learned at LBCC.” TreImage is a marketing, public relations, fundraising, and special events company that Charles founded to raise funds for the city he grew up in while putting on memorable events, performances, festivals, and more for its residents. His most recent project? Bringing the LAWineFest to downtown Long Beach with the Long Beach Public Library Foundation and the Long Beach City College Foundation serving as beneficiaries.  We are so grateful to be a part of this LBCC alumni collaboration!