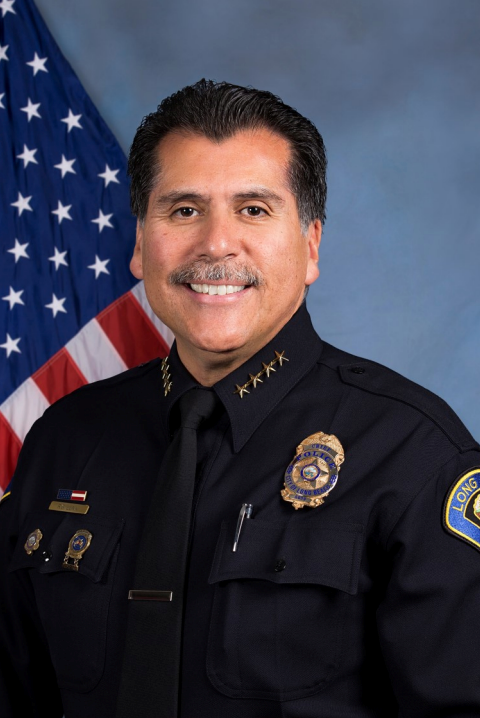 The Long Beach City College Foundation would like to recognize the incredible career of Chief Robert Luna, LBCC alumnus and a respected leader in Long Beach. Chief Luna is planning to retire this December after a nearly 37-year career with Long Beach Police.

Chief Luna’s career in law enforcement begins in 1985, where he started as a Reserve Police Officer with the Long Beach Police Department. He entered the Basic Police Academy in April of 1987 and has since promoted through every rank in the department. Currently, he serves on the Major Cities Chiefs Association (MCCA) Executive Board as the Western Region Representative. In addition to this, he is an active member of the MCCA Homeland Security Committee and is an MCCA Police Executive Leadership Institute (PELI) mentor.

Chief Luna noted that he enjoyed his classes with professor Beverly Curl while at LBCC. He also shared that LBCC helped prepare him for his long and impressive career in law enforcement through excellent education, giving him the courage to challenge himself and others, and helped him become a critical thinker. With this gained confidence to ask tough questions and obtain the facts, LBCC increased his appetite to become more civically engaged.

Chief Luna strongly believes in the importance of higher education. He is a graduate of the Federal Bureau of Investigation’s (FBI) National Executive Institute, the FBI National Academy, the Harvard University Senior Executives in State and Local Government Program, and holds a Masters of Public Administration (MPA) from California State University, Long Beach. When asked to share some wisdom with LBCC’s recent graduates or current students, he said that “education shows us the importance of hard work and at the same time, helps us grow and develop, enabling us to shape a better community to live, work, and play in.”