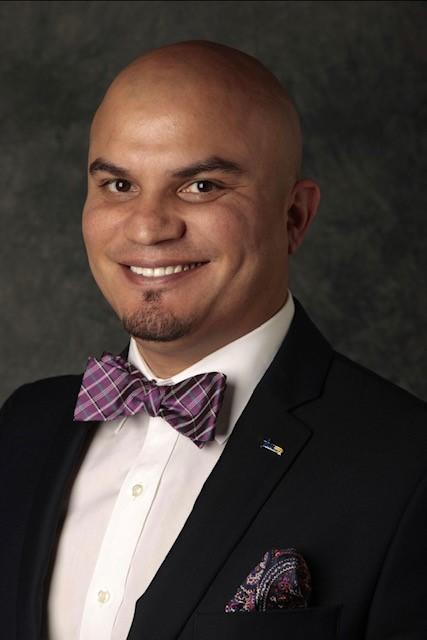 Dr. Blas Villalobos (LBCC class of 2006) understands the importance of community. Born in Chihuahua, Mexico and raised in Denver City (West Texas), Dr. Villalobos entered the U.S. Marines Corps in 1999 to give back and, as he describes it, “earn his place in America.” When he left the Marines in 2003 after serving honorably, he moved home before returning to Long Beach with aspirations of attending classes at LBCC.

As a Viking, Dr. Villalobos was a part of a tight-knit community through the Veteran Resource Center on campus. A work study eligible student, he began working in the office and learned to help his fellow Veterans. He fell in love with the work, fueling a passion for service that has defined his career. After LBCC, he went on to earn his bachelor’s degree in Psychology from California State University, Long Beach and his master’s and doctorate degrees in Social Work from the University of Southern California.

Dr. Villalobos made strides professionally as he advanced toward his educational goals, earning greater responsibility and expanding the community he served at the nonprofit U.S. VETS, then as the Veterans Affairs Manager under Los Angeles Mayor Eric Garcetti, and finally as the Director for Veteran Affairs at Chapman University.

Dr. Villalobos thrived in each new endeavor, and, in recognition of his stellar service to the community, he was hired in July 2021 as the new Chief Executive Officer for Centerstone’s Military Services Division. Kevin Norton, Chief Operating Officer for Centerstone, stated in a press release that Dr. Villalobos was “head and shoulders above the other applicants. His personal connection to the military community, his commitment to serve the veteran population, and his previous experience with these groups make him a stellar find.”

Centerstone is a national nonprofit health system specializing in mental health and substance use disorder services. Dr. Villalobos will be tasked with growing the organizations partnerships with other military-friendly organizations, including existing partnerships with Wounded Warrior Project and Supportive Services for Veteran Families. He will be working with veterans, active-duty military personnel, and military families.

Dr. Villalobos’ Viking family is thrilled to see him serving his community at the national stage and wish him luck in this new endeavor!