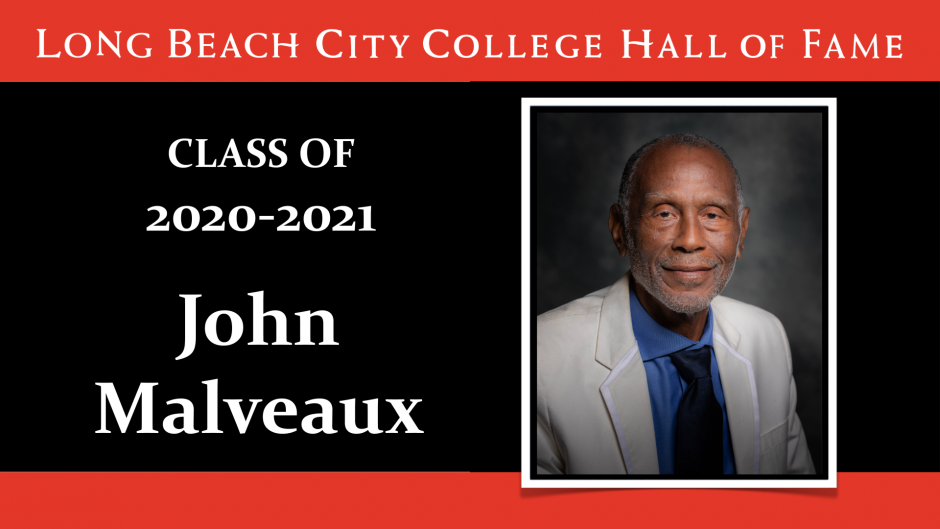 Born in Beaumont, TX, John Malveaux attended Long Beach City College under the name John Champion. The name was fitting, not only for his successes as an athlete, which included a State Championship in Track and Field at LBCC, but also because John has spent his life championing diversity and human dignity.

A dual-sport athlete at Poly, Malveaux went on to Oregon University on a track scholarship. His time in Eugene was cut short, however, when the school failed to renew his scholarship after a series of articles John wrote for the school newspaper discussing racial prejudice against African-American students in the local housing market.

This experience launched a fierce desire in Malveaux to advocate for equality and human dignity. Upon returning to Long Beach, John enrolled at CSULB for a semester before attending Long Beach City College to run track. While at Cal State, Malveaux met Dr. Joe White, the Father of Black Psychology and head of CSULB’s Educational Opportunity Program.

It was through the EOP at Cal State that John was introduced to what would ultimately spark his non-profit life. In 1968, he produced the first fundraiser for the EOP, which featured legendary jazz trumpeter Dizzy Gillespie.

In 1998, John was selected to serve as the president of the Long Beach Central Area Association, a non-profit community organization devoted to presenting arts and educational programs that promote diversity and human dignity.

In 2009, John brought his professional acumen to bear in creating MusicUNTOLD, the production branch of the Long Beach Central Area Association, which provides quality, free programming for Central Long Beach and the surrounding communities.

Under John’s direction, MusicUNTOLD sponsored Misty Copeland, the first African-American principal dancer for the American Ballet Theater, to appear at Long Beach Poly High School, Cal State Long Beach, and in San Pedro. Many of their programs have been housed at Long Beach City College, but in 2015, Malveaux and MusicUNTOLD hosted their farthest-reaching performance – The Abolition of Slavery Concert to celebrate the 150th anniversary of the 13th Amendment at the Daughters of the American Revolution’s Constitution Hall in Washington, DC.

Click here or on the image above to view John’s induction video.