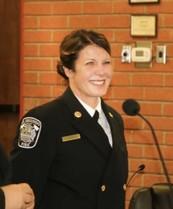 LBCC alumna Deena Lee, battalion chief for the El Segundo Fire Department, is set to assume command as Fire Chief of the department in early November. It’s a historic moment for the community, as Lee will be the first woman fire chief in the South Bay.

Making history has become a habit for Lee, who has worked with El Segundo Fire since 2003. Promoted captain in 2007, Lee was named the South Bay’s first ever battalion chief in 2019.

Lee is excited to give back to the next generation of firefighters, and plans to hold a fire camp for girls age 13 to 19 once she is fire chief.

Looking back at her Fire 101 course at Long Beach City College, Lee can still recall her instructor outlining how selective the hiring process was, and that only one in her class of 30 would become a fire chief. She also remembered thinking to herself that she would be that one person to make it.

In 1999, while studying to be a nurse, Lee was approached by paramedics from Long Beach Fire Department who recognized her strength and encouraged her to consider firefighting. The rest, as they say, is history.