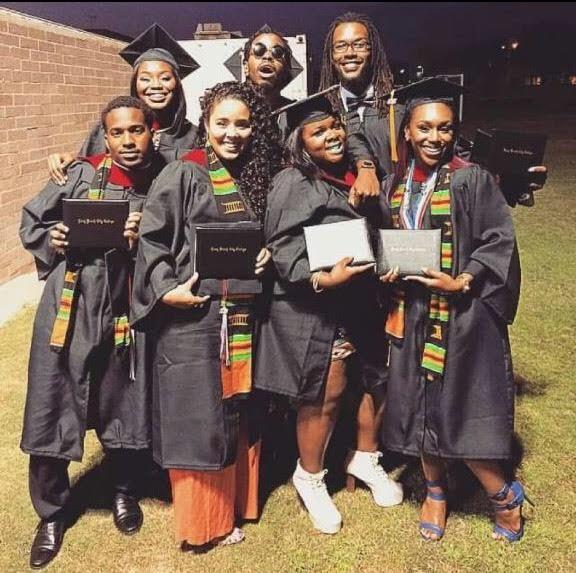 The LBCC Foundation invested in the future of these five ambitious students by supporting their immediate needs or awarding them for academic success. The arc of their lives changed forever and the LBCC Foundation played a profound role in their goal attainment.

Sugar Caradonna loved the vibe of the Bay Area and envisioned that transferring to San Francisco State University (SFSU) would be conducive to her personal growth. Caradonna credits EOP&S with helping her create an Educational Plan that included the necessary science prerequisites for a major in Cell and Molecular Biology.

In addition to working 40 hours a week, she carved out time to be a founding member of DAAP. She also served as President for one semester. “Being in DAAP helped me to dream big and execute my plans to transfer,” said Caradonna.

Receiving a scholarship from the Rotary Club of Long Beach provided Caradonna with much-needed financial support as a student at LBCC. In addition, she received a small stipend from an LBCC Foundation fund that helped her secure a seat on the Transfer Center’s Northern California College Tour. Caradonna stated that “The stipend from the LBCC Foundation made it possible to go on the tour – every dollar I earned working was spent before it touched my hand.”

While attending SFSU as a Biology major, Caradonna received a grant from SF Build (funded by the National Institute of Health) which paid her tuition and a monthly stipend. She participated in neurophysiological research on marine animals and her professors encouraged her to pursue graduate school. After earning a BS Degree in Spring 2018, she completed an Agroecology program at UC Santa Cruz. Caradonna recently applied to five Master of Science in Nursing programs. She currently works as a Labor and Delivery Unit Assistant at Kaiser in Redwood City.

Caradonna’s northern California dream was further realized when she married her husband who is an associate scientist in the BioTech industry. Caradonna and her husband are proud parents of two daughters and live in San Jose, California.

Kehfun Ikemba life’s journey was strengthened by lessons learned as a President’s Ambassador, DAAP club president, and student-athlete at LBCC. He was recognized for his academic achievements by receiving the Marmion Family Scholarship; the Hazel M. Bryant Memorial Scholarship; and a scholarship in honor of Dr. Dave Gayle from the African American Scholars Fund.

Ikemba has fond memories of playing Men’s Volleyball and valued the camaraderie of team sport. As the President of DAAP, he learned how to facilitate meetings, hold himself and others accountable, lead projects, and productively manage conflicts. “My experience as a club president led me to become the coordinator of the President’s Ambassadors. The lessons learned from each of these roles helped me to secure my first Engineering internship and be prepared for job interviews,” said Ikemba.

With a desire to experience life beyond Long Beach and the greater Los Angeles area, Ikemba had his eye on Northern California colleges. “When I transferred to SFSU as a Civil Engineering major, I thought I had life all figured out. I just knew I would become a Civil Engineer and work for the Port of Long Beach…instead I changed my major, changed schools, and found the love of my life,” said Ikemba.

Living in Northern California helped to broaden his view of careers in Engineering. He then transferred to CSU East Bay (CSUEB) and completed a degree in Industrial Engineering. The LBCC Foundation continued to play a role in his success at CSUEB. “I felt privileged to receive the Hazel M. Bryant Memorial Scholarship. I could count on that scholarship every semester while completing my BS degree,” said Ikemba.

Shortly after graduating in Spring 2019, Ikemba married the love of his life who is an educator and community leader. He accepted a job with Uniliver as a Process Engineer and proudly purchased his first family home. Ikemba lives with his wife and son in Kansas City, Missouri.

Bresheena (Baseel) Okeke felt pressured to attend a four-year college when she was a student in high school. She cites enrolling at LBCC as the smartest choice she could have made. “Attending LBCC saved money and it also prepared me to transfer to a university. I received a college scholarship from my church and was later awarded the Harley B. Smith Family Scholarship through the LBCC Foundation,” said Okeke.

She excelled academically by utilizing Instructional and Student Services programs such as the Library, Math Center, EOP&S, and Transfer Center. She is thankful to Transfer Center Coordinator, Ruben Page, and Enrollment Specialist, Arleatha Brooks for helping her transfer to SFSU.

Given her charismatic and friendly nature, she found herself involved in campus activities through DAAP. Okeke first served as the club’s ASB Senate representative and then became President in her last semester at LBCC. One of her most outstanding achievements was organizing an ASB-sponsored event that involved the work of 20 students.  She led a project called S.H.A.D.E.S (Showcasing Hues of African Designs Existing in Society) which helped her to hone her leadership and communication skills.

“I built on my networking and leadership skills learned at LBCC to become involved in student organizations at SFSU,” said Okeke. Recognized for her work as the logistics chair of the SFSU Afrikan Black Coalition Conference, she was offered an internship with Kaiser Permanente’s KP LAUNCH Program. Okeke interned as a program coordinator for two summers and graduated in Spring 2018.

Following her internship, she secured a permanent position as a Community Health Liaison for the Kaiser Permanente Educational Theatre. Armed with an excellent job and a BS in Business Administration, Okeke decided to stay in the Bay Area after graduation. Okeke attributes living in Northern California to meeting an attorney who is now her husband.

Okeke recently returned to Long Beach with her husband and started a family with the birth of their daughter.

Tiffany Onyejekwe enrolled at LBCC without knowing anyone on campus. “Being from Cerritos, I was an individual student trying to find my own voice,” said Onyejekwe. Fortunately, she met like-minded students with similar goals and interests in DAAP. The DAAP members encouraged one another to maintain high academic standards and apply for LBCC Foundation scholarships. Onyejekwe was awarded the Ruth Wright Scholarship during her second year at LBCC.

Going to college while maintaining a high GPA was a family expectation. Even though she could have applied to numerous colleges with a 3.8 GPA; she only had her sights set on SFSU. “I had great professors at LBCC that took me under their wings. They taught me that college is what you make of it. I had to define my own path,”  said Onyejekwe.

Onyejekwe applied to SFSU as a Psychology major, yet she was still a little anxious about moving away from home. With the sense of community established in DAAP, Onyejekwe made a pact with Bresheena Okeke and Sugar Caradonna to become roommates when they all found out that they were admitted to SFSU in Fall 2015. “Having familiar roommates helped with the transition of being in a new environment,” said Onyejekwe.

After graduating from SFSU in Spring 2017, Onyejekwe returned to Southern California and briefly considered following in her father’s footsteps as an attorney. Yet, she found value in the experience she gained from living in Northern California and forged a different path by starting a career with Nike. Onyejekwe uses her knowledge of psychology, advertising, and social media in her job as the Operations Manager for the Nike Content Studio in Los Angeles.

Onyejekwe lives in Cerritos and is also open to more creative endeavors. She is in the second round of applications for a Fellowship in screenwriting.

Nailah Sewell made the most of her academic experience at LBCC by being a student in the Honors Program. She was awarded the highly competitive Rotary Club of Long Beach Honors Scholarship. Sewell maintained a 3.7 GPA and positioned herself to apply to three UC campuses in addition to Howard University.

Sewell rounded out her academic pursuits by being a member of DAAP. “Being involved in DAAP helped me to show up as a better version of myself,” said Sewell.

Sewell received a great deal of support from the Transfer Center during the four-year college application process. An enrollment specialist encouraged her to apply to UC Berkeley as one of her transfer options. UC Berkley was not on Sewell’s radar as she had never visited Northern California. She received acceptance letters from UC Los Angeles, Irvine, Berkeley, and Howard University. In the end, she chose UC Berkeley after participating in the Bridges Transfer Weekend. “I tapped into the ethos of Berkeley and that was it for me,” said Sewell.

After earning Associate Degrees in Communications, Psychology, and Sociology from LBCC, Sewell felt prepared for the academic rigor of UC Berkely. Her efforts to stay academically and socially engaged helped her to receive scholarships while attending UC Berkeley. Sewell graduated in Spring 2018 with a 3.6 GPA. She double majored in Anthropology and African American Studies.

Sewell returned to Southern California and worked as a substitute teacher while exploring career pathways. In 2021, she embarked on a two-month solo trip to Ecuador. She explored 15 cities and remote towns citing it as an intense and life-changing experience. “Moving to Northern California and attending UC Berkeley helped me to have a global view of the world,” said Sewell.

Sewell currently lives in Long Beach and has turned her passion for sustainable fashion into an online business.

The collective stories of the Caradonna, Ikemba, Okeke, Onyejekwe, and Sewell highlight the unique academic and social environment provided by LBCC. Most of all, their success gives voice to the LBCC Foundation’s mission of providing scholarships and supporting an outstanding learning environment for all students.