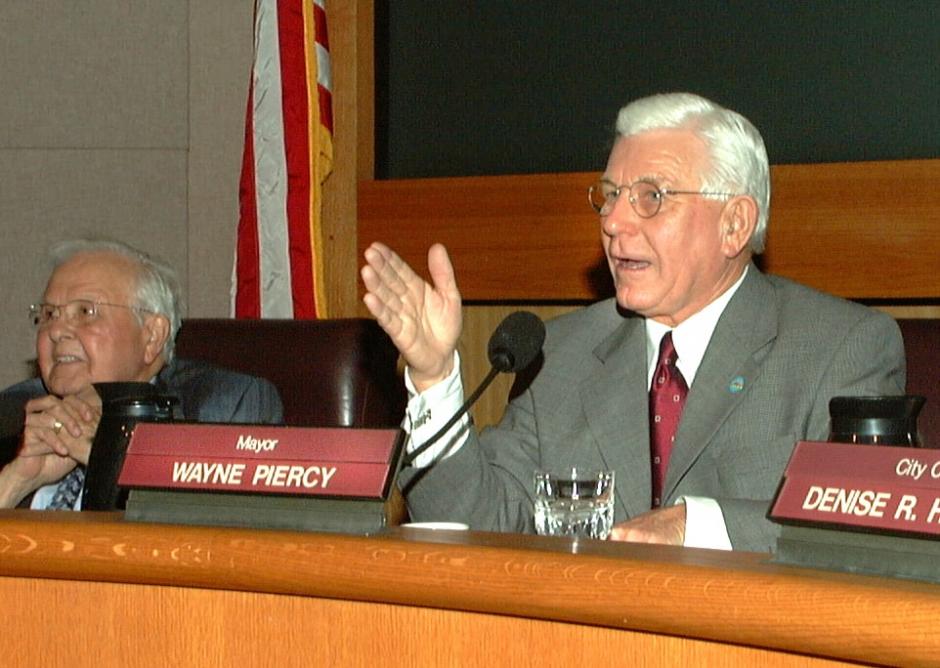 “Lakewood residents,” said Mayor Todd Rogers, “will always remember Wayne for his distinctive ‘salt white’ crown of hair and for his many years of community work, not just with the City Council but as a passionate volunteer with the Rotary Club, Meals on Wheels and Project Shepherd. He continued that volunteerism even after retirement from the City Council. Wayne will be sorely missed by all of us on the City Council and by so many residents in our community who appreciated all that Wayne did for Lakewood.”

Piercy’s accomplishments on the City Council included promoting recycling in the early 1990s, brokering a truce between Lakewood and Long Beach over the reuse of the Long Beach Naval Hospital (which bordered the two cities), and supporting the development of Boyar Park and Rynerson Park, in which Piercy led city negotiations with Southern California Edison Co. for one of the first uses of a power line right-of-way for a park.

See a Lakewood CityTV interview with Wayne Piercy just prior to his retirement from the City Council in 2005.

Piercy graduated from Long Beach Poly High School in 1949, attended LBCC where he is a member of both the Alumni Hall of Fame and the Hall of Champions for his track accomplishments.  He went on to earn a bachelor’s degree from U.C. Santa Barbara (which he attended on a track scholarship) and earned a master’s degree from California State University, Long Beach.

In his early 20s, he worked for Lakewood as the first park director at Mayfair Park. Ultimately, he went into education as a career and worked for many years for the Long Beach Unified School District. He became a vice-principal of Millikan High School and principal of Long Beach Poly High School. In 1990 he received the California Educator Award for an outstanding career in education and school administration.

Piercy is survived by his wife Jere, and his children Robert, Cheryl, Judy, and Rick, along with multiple grandchildren and great-grandchildren. He was predeceased by his first wife Pat.