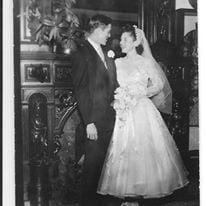 The Long Beach City College Foundation has received a bequest from the estate of Paul and Margery Craven.  The departments of English, Journalism, and Music will all receive over $70,000 each from this generous gift. “These departments will be thrilled to hear this news,” smiles Letty Totah LBCC Foundation Assistant.

Paul “Dick” Craven attended LBCC and was a Viking Award Winner in 1946. During this time, he became the editor of the newspaper and worked on the yearbook (Saga).  After LBCC, Paul attended the University of Oklahoma ultimately finishing his degree at CSULB. He was one of the first students enrolled there in 1949. After receiving his teaching credential (English and Journalism), he taught at Poly High School in Long Beach for several years.  He then received his Master’s degree from CSULB in 1957.  He then spent the next 33 years teaching Journalism and English at Long Beach City College.  While helping with the yearbook and school newspaper, Paul also worked the press box at football games and worked the door of the home basketball games.  He continued to volunteer at LBCC after he retired, working with Ginny Baxter on many committees including the 75th and 80th school anniversary celebrations.

Margery, who passed in 2006, attended LBCC and then went on to UCLA. Once Margery and Paul married, she embraced the role of being a stay-at-home mom. While raising their children, Margery found time to support LBCC in many ways, including being involved in the group called Faculty Wives, a group that helped raise funds for student scholarships. She served as president for several years, as well as in many other positions.  Margery embraced Paul’s love for LBCC.

“Recognizing my parents is a tribute that both my mother and father would treasure,” emphasizes daughter Brook Craven Nesbit.

If you would like more information on how you, too, can leave a Legacy, please visit: https://lbccflegacy.org/   or contact Paul Kaminski at pkaminski@lbcc.edu