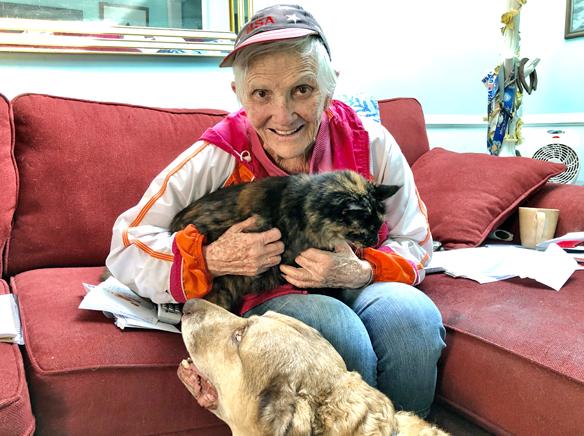 On May 12, Seal Beach native and Olympic legend Pat McCormick celebrates her 90th birthday.  Last week I had a lovely chat with Pat as she reminisced about her life and career.  She was surrounded by her dog, Brave, and cat, Mr. Purr.

I met Pat many years ago when we’d sit at the donut shop and later on at the beach trail with a cup of coffee and gab and yak about all the latest happenings.  She was looking for ways to help people and eventually decided on, “Pat’s Champs,” the nickname for The Pat McCormick Educational Foundation.

Her goal was to help young kids stay in school and become winners in life.   A perfect choice for a woman who became a role model society could respect and admire.  Pat went to work raising funds for these children so they wouldn’t drop out and instead become productive adults.  The kids she helped absolutely adored her.  She was a huge inspiration to so many people, young and old.  I remember the raffles and golf tournaments she organized since I would get her announcements in the mail.  She invited her Olympic athlete friends, like Rafer Johnson, to come and take part in her charity events.  “Pat’s Champs,” was a huge success.

Aunt Gertie was thrilled to find out Pat was a little mischief maker in her younger years.  She revealed a few tidbits of her trouble making history.  Over in Naples, on the Rivo Alto Canal, Pat would fish and drop water on people in boats as they sailed under the bridges and even broke the law diving off of them.  She loved being in the water and would swim across the bay to have fun jumping on the pontoons.  One day somebody recognized her talent as she dove off one of the bridges and asked her to join the LA Athletic Club.  Pat McCormick was on her way to becoming an Olympic athlete.  She would win two gold medals in diving during the 1952 Olympics and two more in 1956.  She retired and did diving tours and became a model for Catalina Swimsuits.  She went on to accomplish a lot in her later years.

Patricia Joan Keller was born in Seal Beach on May 12, 1930.  She was raised in Long Beach and attended Wilson High School, Long Beach City College, and California State University, Long Beach.  Pat married Glenn McCormick and they had two children, Tim and Kelly.

To me, Pat is one of the kindest, most generous women you’ll ever meet and she still has a sparkle in her eyes. She told me she feels she’s got about five more years left.  I disagree.  Our Olympic champion is sure to make it to 100.  Pat McCormick has four gold medals but in my eyes having a heart of gold reigns supreme!

Happy 90th Birthday, Pat!  Aunt Gertie loves you and so does all of Seal Beach!