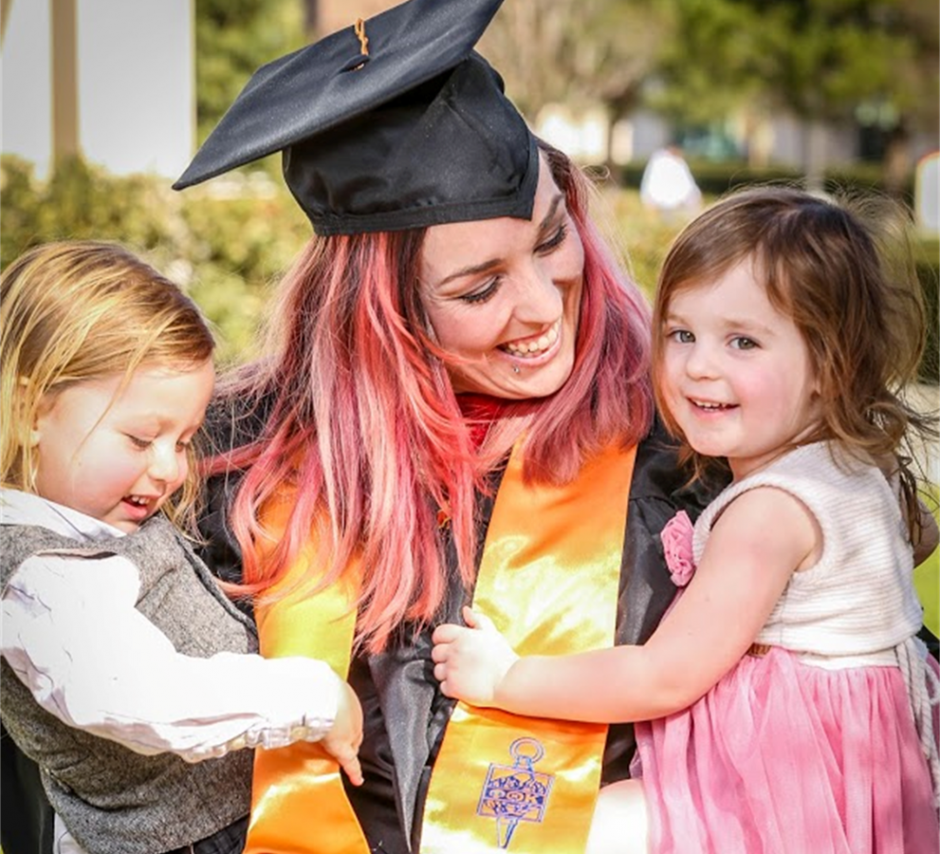 For many students, the path to higher education is anything but direct. Each year, LBCC students overcome challenges to beat the odds that are oftentimes stacked against them. For Taryn Williams, this is one such story of resilience.

Growing up in an unstable home environment, Taryn attended upwards of ten different LBUSD schools moving between her mother’s, father’s, and grandmother’s homes. Spending time in foster care following abuse in her mother’s home compounded the upheaval she experienced. However, it was when her mother died by suicide that Taryn’s lift took a turn for the worst. Young, angry, hurt, and alone, Taryn spiraled down a path of drug abuse and alcoholism. Nonetheless, Taryn persevered and graduated from Woodrow Wilson High School. She began coursework at Long Beach City College, but dropped out after several failed semesters. She spent the next six years battling a heroin addiction, in and out of jail, detox centers, and rehabilitation facilities.

It was when her twins were about 15 months old that Taryn knew it was time to make a change. She returned to LBCC and finally finished two years later with two degrees and three certificates. She was officially a first-generation college graduate!

“It meant everything for me to be able to show my kids what it looks like to go to school, to study, to walk across that stage. Life as a full-time student and parent was not easy.” Taryn describes how the Osher/Patterson Foundation Scholarship during her first year as a returning student enabled her to focus on her studies.

She states, “Receiving that scholarship meant a lot to me because I was on financial aid probation and had two small babies at home. As I’m sure all of you are aware, books, supplies, and childcare are very expensive! That scholarship gave me the financial stability necessary to continue but also the confidence in my ability. I had never won anything based on academic merit before. In a lot of ways, you could say that scholarship was the catalyst for me.”

Taryn recently completed a bachelor’s degree in business from CSULB. While graduating during the Covid-19 pandemic was disappointing as commencement was delayed by a year, it was well worth the wait to serve as commencement speaker and see her babies on the jumbotron at Angel Stadium. Ready for the next step in her journey, Taryn is thrilled to announce that she has just begun her PhD program in Organizations and Management at UCI where she will focus on internal labor markets, opportunity gaps, team dynamics and Diversity, Equity and Inclusion in the workplace. Her hope is that her research will inform programming and change policies to support the formerly incarcerated (FI) community in getting and maintaining employment and help companies understand FI’s value to team dynamics and organizational outcomes.

Looking back on her time as a Viking, Taryn states, “I wouldn’t be where I am if the faculty, staff and donors hadn’t taken me under their wings. LBCC is special in that way. Our city has its own culture and sense of community where we take care of each other, simply because, we’re Long Beach. I thank everyone for all the support they’ve given me over the years. And my ask to the LBCC Family now is to take action, show up, and be there. Don’t stop learning about the students, and who they are. Ask questions. We don’t need any more committees, we need doers. I credit those doers at LBCC for my success. They helped create a more equitable experience for me, so that I could find my place in academia, and one day return to pay it forward.