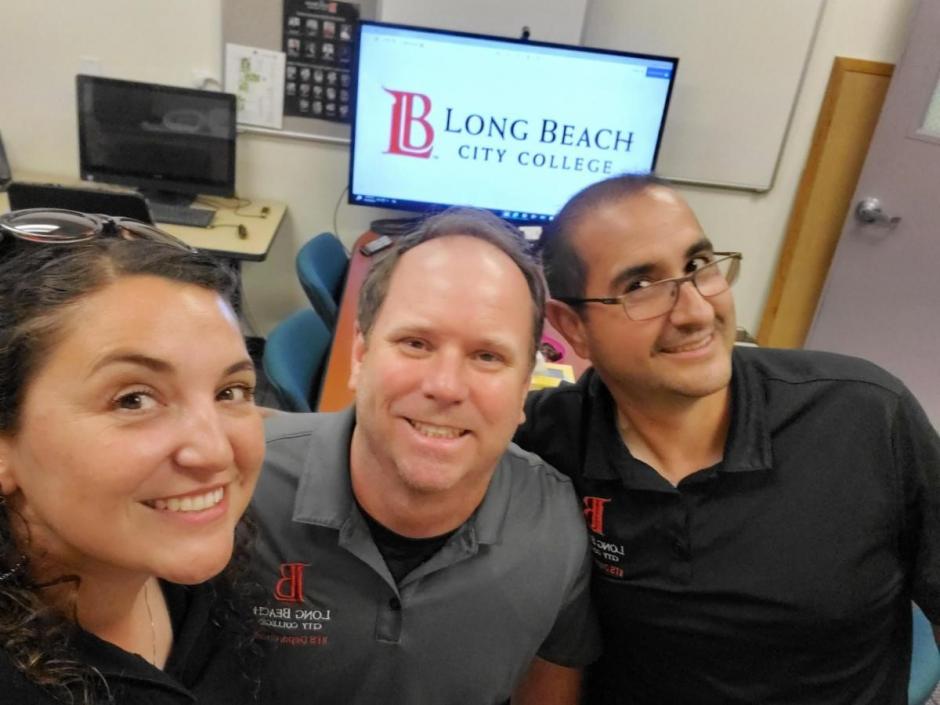 The Fall semester is officially underway, so we wanted to take the time to sit down with three alumni that help make the incredible instruction on both of our campuses possible: Tim Heffern, Deputy Director of Academic Computing & Multimedia Services; Roger Isaslazo, Interim Technology Services Manager; and Mayra Aguilar, Project Manager for Educational and Multimedia Technologies.

All three work for the College’s Instructional & Information Technology Services (IITS) and take pride in being the “ninjas in the background,” working to ensure that dynamic instruction is available to all of our students. What that translates to is the oversight and maintenance of over 3,000 computers for student use in over 120 labs across the Liberal Arts and Pacific Coast campuses. Additionally, they install and maintain multimedia hardware in well over 300 of our classrooms to ensure that approximately 90% of all of LBCC’s classroom spaces are smart classrooms. This provides our students with access to the tools that they need to complete their assignments without incurring the cost of that access. It also allows our professors to seamlessly switch between document viewers, videos, slideshows, and more to keep our students engaged in their education. “We can’t take sole credit for this,” said Tim. “It’s a team effort. Between all the different branches of IITS, not to mention our warehouse, facilities, and operations teams – there are so many departments that are working together to support our students. It’s great to be a part of it.”

In addition to their work in individual labs and classrooms, IITS has taken an active role in planning and designing the latest bond-funded construction projects at LBCC, ensuring each new building has the proper infrastructure to support the College’s mission to deliver high-quality educational programs and support services to our diverse communities. “This is so important. As technology continues to develop we’re finding more and more that technology is no longer in the classroom, it is the classroom,” said Tim.

“It takes a lot of communication and teamwork,” added Mayra. “A lot of us take pride in the instruction that is happening because of our work. I think as alumni we really see the importance of giving back to this community.”

The love they feel for this campus is understandable since all three credit their time here with the success they’ve found in their careers.

Tim was originally enrolled at California State University Long Beach (CSULB) but withdrew after his third semester. “It was too impersonal, and I wasn’t disciplined enough at the time,” he explained. “That was when I enrolled at LBCC. It was the personal touch that I needed. There were smaller class sizes, and it felt like the faculty and counselors actually cared about me. It was a much better transition to college for me.” The transition worked for him, allowing him to complete his general education courses, earn an associate’s degree in Liberal Arts, and transfer back to CSULB to earn his bachelor’s degree in Management Information Systems. He came back to LBCC in 1995 to work and has been here ever since, earning a master’s degree in IT from Cal State Fullerton along the way.

Roger was the first in his family to graduate from college, earning his associate’s degree in Electronics and CISCO Systems from LBCC. He began working for the College as a student worker, spending one hour per week in the computer lab helping other students. His supervisors were immediately impressed by his work ethic and increased his hours the following semester, finally bringing him on full-time after he earned his degree. His degree and the discipline he learned as a member of the Marine Corps Reserves allowed him to excel when he transferred to CSULB in 2001, where he earned a bachelor’s degree in Computer Engineering Technology and Electronics. “It was a great program for me. It taught not only the tech side of things but provided me with managerial experience and training.”

Mayra grew up in Southeast LA, in what is now known as the Gateway Cities. The sixth child of immigrant parents, she was accepted into CSULB but was unable to afford the tuition, something she looks back on now and sees as a gift in disguise. “My friends were at LBCC taking audio recording classes, and they all told me how great it was.” Mayra has always been an audiophile, using her brother’s 8-track recorder in high school to experiment with different recording styles. “So I made the decision to go to LBCC and bought a class schedule at 7-11 for $1.00 the same day. It laid out everything for me – I knew every class I was going to take before I enrolled.” The courses were intensive, featuring hands-on training in the studio on the first day. “It was great. They made it clear that we were learning skills for the real world.”

As our three IITS staff-alums, and the campus community as a whole, look toward 2020 and beyond, the college they’ve called home for so much of their lives continues to press onward, evolving, and progressing to meet and exceed educational technology needs. It’s safe to say LBCC is in good hands, being guided by people who know the impact that its programs, its technology, and its people can make on students.