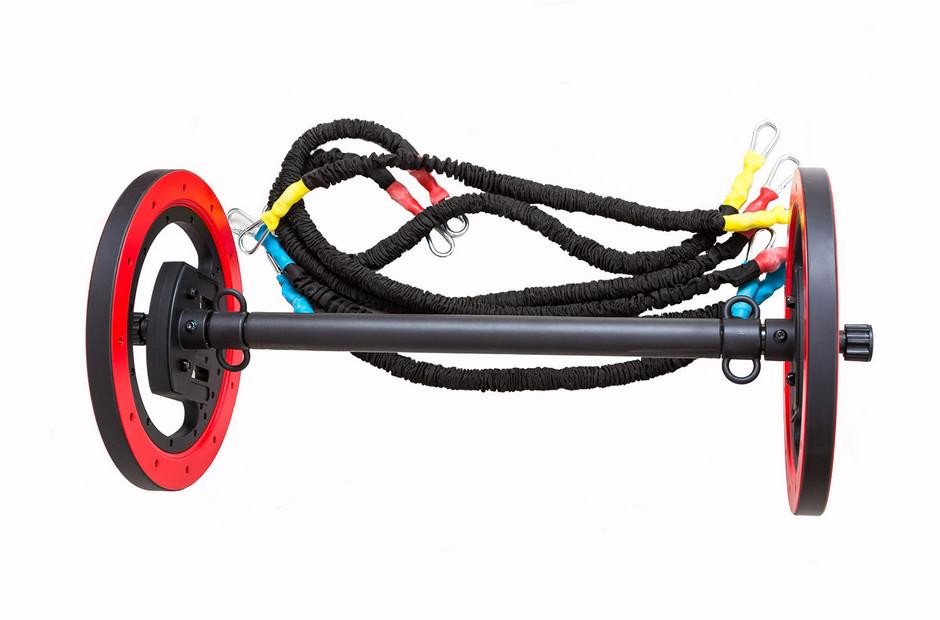 Four years ago, fitness trainers Brian Abercrombie and Kristin Anderson had an innovative idea for a portable Pilates exercise machine.

With the help of a grant from Long Beach City College’s Innovation Fund SoCal, the duo has brought that idea to market – and sales are steadily moving.

Drawing on their knowledge and long-time experience in fitness, Abercrombie and Anderson created the “Pilates Wheel” and unveiled it on the HSN channel in February.

The Pilates Wheel is a portable exercise system that lets users do many of the same Pilates movements typically done with much larger, stationary Pilates machines.

“It’s something very different that doesn’t exist in the market today,” Anderson said. “It takes something that is older and maybe more intimidating to a more modern level. It helps brings Pilates into the 21st century.”

The Pilates Wheel is on sale on HSN’s website for $199.95 and comes with workout DVDs, a meal plan booklet, and various bands, straps and other tools for various configurations. Since the spot aired on HSN, more than 400 Pilates Wheels have sold.

He and Anderson credit their success in large part to Innovate Fund SoCal.

“[Innovation Fund] SoCal was a big, big jumpstart for us,” Abercrombie said. “It pushed us much further down the road than just the money would do.”

LBCC’s Innovation Fund So Cal program offered grants and loans to established businesses that are past the startup phase but still need help. The goal of the program is to help companies grow by providing seed funding, advising and contacts to help companies get to the next level.

“There’s support for startups and for established businesses, but there’s a gap for people in that middle phase when trying to ramp up,” said Lou Ann Bynum, Executive Vice President of Economic Development for LBCC’s College Advancement & Economic Development.

The Los Angeles-based Abercrombie and Anderson, who have been working together through their company, Engine Fitness, were in that middle phase, sometimes known as “the valley of death” for entrepreneurs. They applied for a grant and were one of the companies awarded funding during the first round of Innovation Fund SoCal.

“I don’t think we’d be here without the grant,” Abercrombie said. “The relationships and the information was invaluable. … We are proud of our product, and everyone we met was really enthused about our product and helped us get us further down the road.”

The program, along with LBCC’s Small Business Development Center (SBDC), provided them with an understanding of the challenges ahead and introduced them to contacts to help with designing a prototype, manufacturing, and negotiating contracts. They were also given an advisor who worked closely with them in getting their product to market.

“It gave us critical relationships and education,” Anderson said.

Though Innovation Fund SoCal is not currently taking applications, LBCC has launched a business accelerator program, IBA @ LBCC, which is aimed at helping companies in specific industries enter the global market.

“We have a lot of educational resources, and we have SBDC,” Bynum said. “You get direction, guidance, connections with experts in the field.”