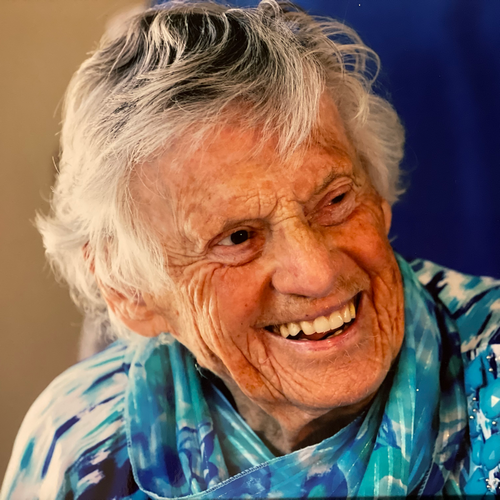 The ceremony took place over Zoom on March 11, originating on the Northern England campus with the Vice-Chancellor, the University Warden, and staff. Family, friends, and students of Dr. Thoits were able to witness the ceremony from the United States.

Before her death at the age of 97 this past January, Durham had alerted Mary of the honor that would be bestowed on her. She attended the University for her Senior year in 1946 because of her love of English literature. She long credited the University for helping to shape her into a free thinker, and later in life, she established a scholarship for Durham students.

Mary, who until 2015 was Director of the Senior Studies Program at LBCC, was pivotal in the development of lifelong learning programs for senior citizens within the District’s communities. She officially retired from LBCC in 2015, but continued teaching part-time until the pandemic closure.

She led a rich life, which saw her boldly travel the world. Thoits was also part of the U.S. Women Airforce Service Pilots, having learned to fly planes at the age of 16 in response to being told that driving cars was not for women. She later spent 15 years in Europe as a Recreation Director for military personnel.

“Mary Thoits reinvented the educational opportunities for seniors,” said Professor Maggi Dawn, Principal of St. Mary’s College at Durham. “Right up to the end of her life Mary shared her energy with those around her. Her life and achievements personified the Durham ethos and her contribution to lifelong learning is of lasting significance both at Long Beach and here in Durham.”

Mary’s name will now be listed alongside other alumni such as Charlie Chaplin, in their honorary graduate book signed in their 200-year-old Durham Cathedral, where graduation ceremonies are traditionally held. This was the first posthumous ceremony carried out by Durham University in its 189-year history.