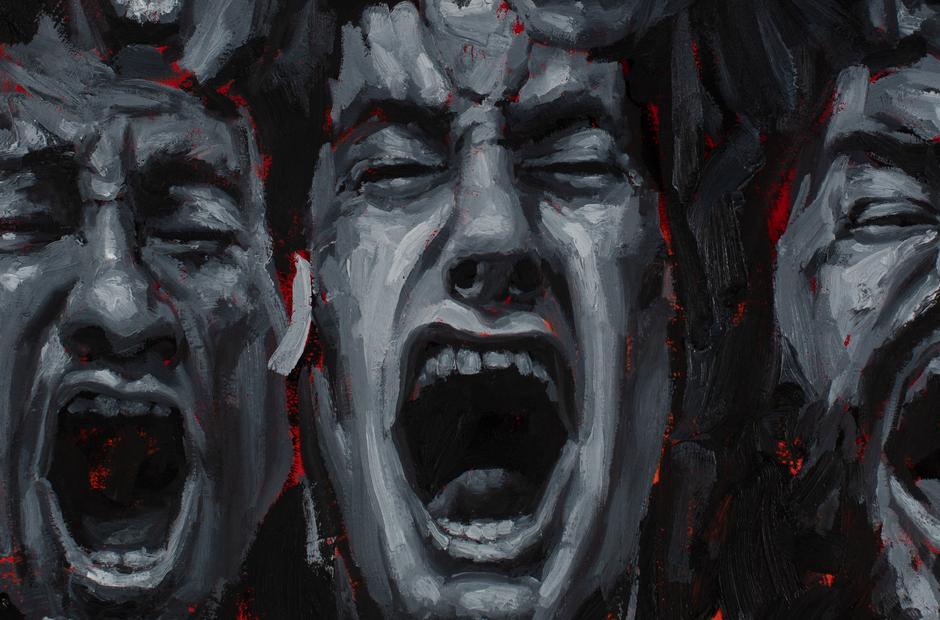 2020 SCREAM is an online exhibition inspired by the artistic images that have proliferated as the year, and our collective existential anxieties progressed. This visual riot has been appearing on the streets and on alley walls, on social media platforms, and on television.  They reflect the dual nature of our world: alarming scenes of brutality that threaten to wound the human spirit, alongside works that proffer hope and healing. What all this brings to this curator’s mind, with due deference to, and with all populist debasements aside, is Edvard Munch’s iconic 1892 image, “The Scream”.

2020 SCREAM is a response to these extraordinary times, to the trials and tribulations being experienced in the U.S., and the cascade of effects felt around the world. The issues matter: COVID-19, authoritarian brutalities, homelessness, poverty, massive migrations, the recent deaths of beloved political leaders, and the Black Lives Matter movement. We are all, regardless of socio-political standing, treading the same dirty water to keep our heads up, and our voices from being drowned out. Additionally, we are carrying the psychological burdens of the ongoing political campaign for U.S. President, itself a barrage of manipulation, machination, and bombastic hyperbole, designed to drown out the rational voice and fog the clear mind.

Who can be trusted to filter and distill the truth in all of this? We say, artists. Open channels for creativity are critical now. Museums and galleries are closed, but that hasn’t stopped the artists. Their works are around us in abundance – in art studios, on social media, and on the streets. These visual gifts are being given free of charge to feed the cause for change. 2020 SCREAM will collect key works together in one online place; those wild fruits born of sincere and dedicated labor.

Seija-Sisko-Rohkea, who is collaborating on this project, has passionately documented, collected, and stored many of these arresting street murals spontaneously produced around the city of Long Beach, murals that otherwise might have been lost in this tumultuous time. Some of these murals will be accompanied by artist statements to further illuminate underlying motivations and processes. Others works in varying media will be collected from artistic responses to the aforementioned existential crises, sent to us for consideration for inclusion in 2020 SCREAM. 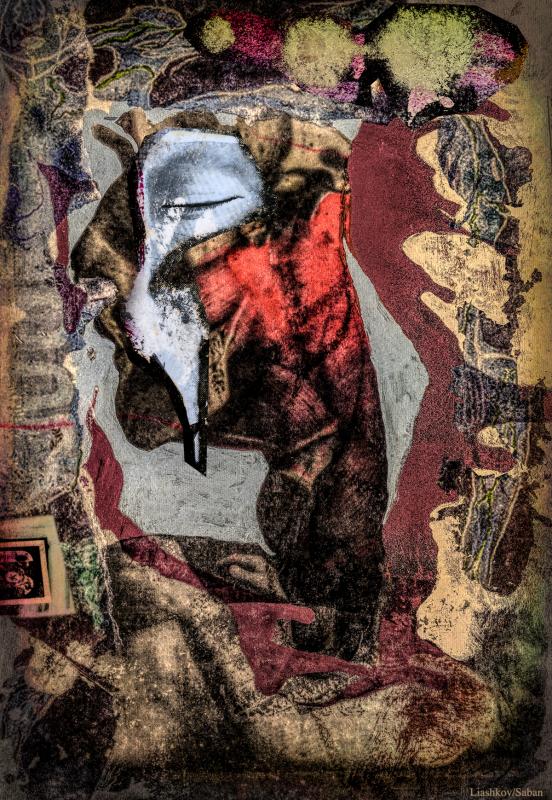 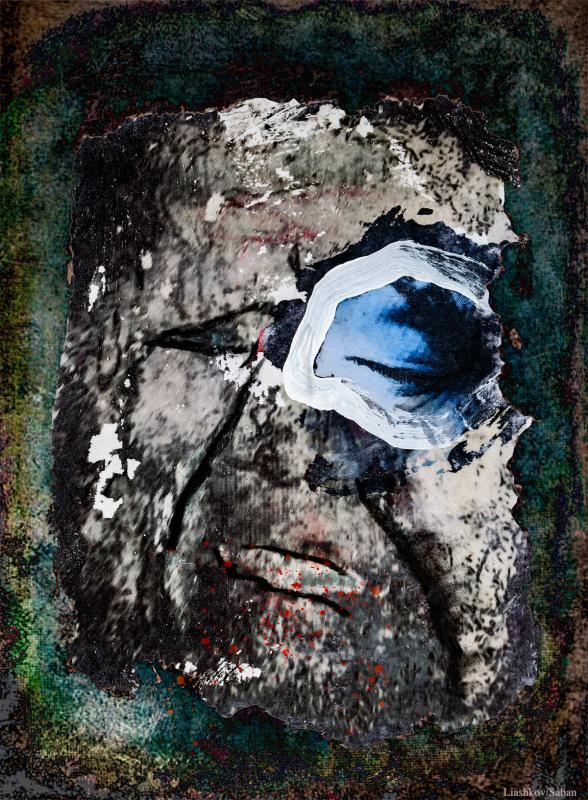 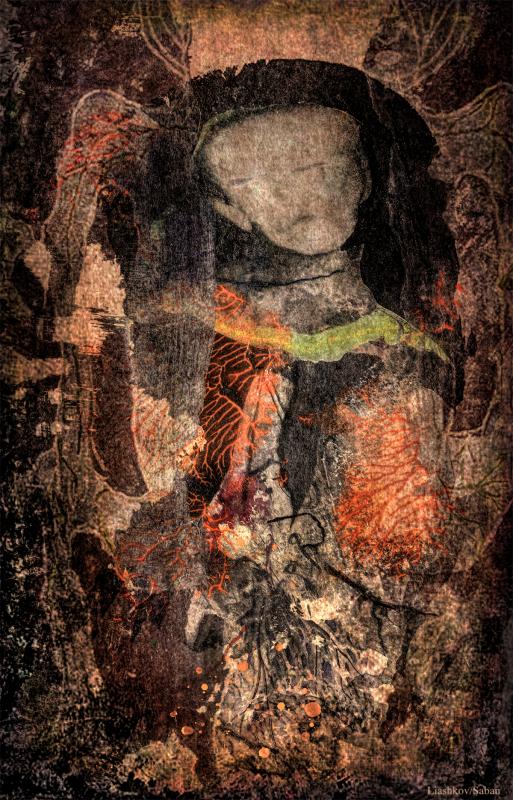 Liashkov has maintained an art practice since the 1980s. His work has been deeply rooted in the human figure; working two-dimensionally in mixed media techniques on unusual grounds like synskin, fiberglass mesh, and other translucent materials. Currently, his primary interest is reflecting on the ever-changing richness of Los Angeles since his immigration here 65 years ago. He is Professor Emeritus from Art Center College of Design and has traveled extensively throughout Europe and the Middle East. Since retiring from teaching he has done residencies in Russia, Norway, Argentina, and the U.S.

Don Saban, a native of Phoenix Arizona, received his formal training at the prestigious Brooks Institute of Photography in Santa Barbara. While attending Brooks, he simultaneously studied art and photography as a protege of professor William A. Rohrback, University of California Santa Barbara, who in turn studied
with Minor White at Berkeley in the early ’50s.

After coming to Los Angeles, he taught at Otis/Parsons and continued his photographic work which was published in numerous magazines and exhibited at different venues around Los Angeles. After 10 years in Los Angeles, Saban was offered the position of Principal Photographer at the University of California
Santa Barbara. During that period, the Santa Barbara Museum of Art commissioned him to travel to Budapest and make the photographs for the book Standing in the Tempest: Painters of the Hungarian Avant-Garde.

Saban then returned to Los Angeles once again, and in 1999 was brought on board as a photography consultant to work on the Tokyo DisneySea project. Saban found a new home with the Walt Disney Imagineers, and 21 years later, is still consulting, and most recently photographed The Galaxy’s Edge.

Currently, Saban is collaborating on projects with Peter Liashkov, which started with Strange Fruit and was exhibited in the Black Lives Matter show at El Camino College Art Gallery. 2020 SCREAM will be their second such outing, with their new body of work, Pandemiko.

Saban has had many one-man and group shows over the years and is in the permanent collections of museums, institutions, and private collections worldwide.

Autograph for Grief from kim abeles on Vimeo.

Kim Abeles is an artist whose artworks explore biography, geography, feminism, and the environment. Her work speaks to society, science literacy, and civic engagement, creating projects with the California Science Center, health clinics and mental health departments, and the National Park Service. Her collaborations with air pollution control agencies involve images from the smog, and largescale projects with natural history museums in California, Colorado and Florida incorporate specimens ranging from lichen to nudibranchs. In 1987, she innovated a method to create images from the smog in the air, and Smog Collectors brought her work to national and international attention. National Endowment for the Arts funded two recent projects: as artist-in-residence at the Institute of Forest Genetics she focused on Resilience; and, Valises for Camp Ground: Arts, Corrections, and Fire Management in the Santa Monica Mountains were made in collaboration with Camp 13, a group of female prison inmates stationed in the Santa Monica Mountains who fight wildfires. She has received fellowships from the Guggenheim Memorial Foundation, J. Paul Getty Trust Fund for the Visual Arts, California Community Foundation, and Pollack-Krasner Foundation. Her work is in forty public collections including MOCA, LACMA, Berkeley Art Museum, Brooklyn Museum, California African American Museum, and the National Geospatial-Intelligence Agency. Abeles’ process documents are archived at the Center for Art + Environment, Nevada Museum of Art.

After her televised debut on October 7, the nation went a-buzz for this clear winner of the 2020 Vice Presidential debate. Marinda Martin is a graphic designer and wildlife illustrator living in San Francisco. 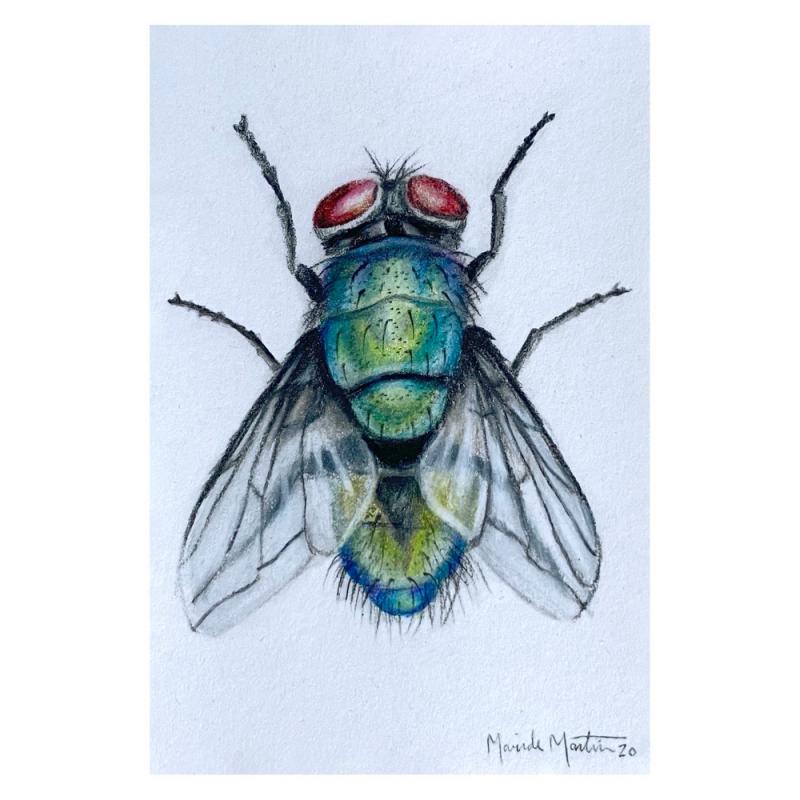 In 2015, her photographic lightboxes commissioned by Metro Art at Los Angeles were on view for the year at Union Station.  Her artwork has been reviewed by the LA Times, LA Weekly, THE Magazine, The Huffington Post, Artweek Magazine, and Photograph Magazine. Suzanne Adelman received her MFA degree from Cal Arts. 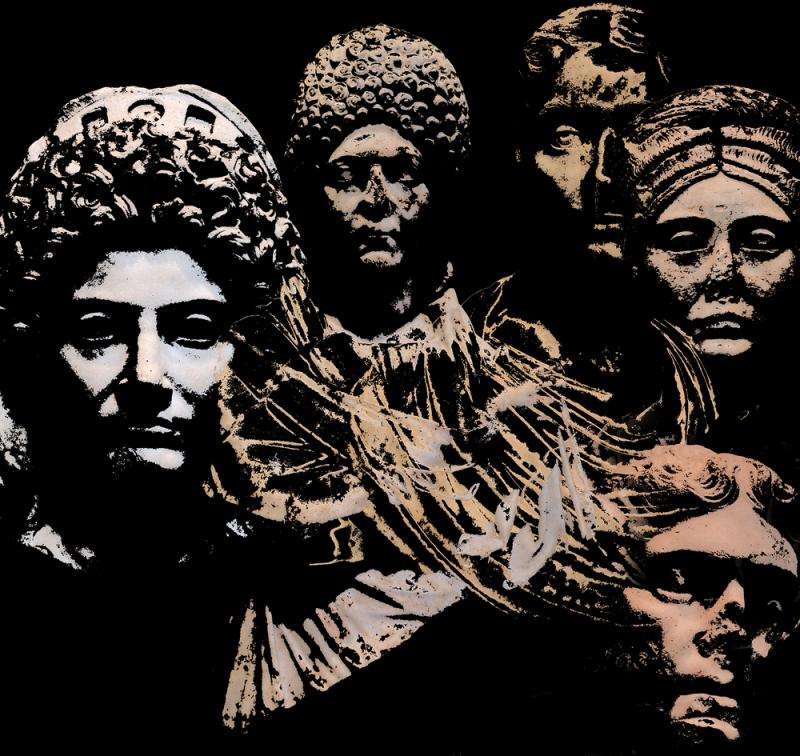 Michael Arata’s artwork ranges from figurative to abstraction that conjures a glimpse of emotional beauty. The artwork he produces usually has an initially pleasant visual impact that he uses as an entry point to reveal a deeper concern. He often flirts with fashion, sex, religion, politics, social disorientation, and social reflection mixed with personal experiences. Sometimes these issues are gleaned from public news venues, social media, or from the mail delivered by the US postal service. Our current political environment fosters dramatic social divisions more than in the past, These divisions can be manifested in tender acts of humanity. Not only are these avenues sources of ignition for Arata, on occasion the mail sometimes becomes the physical material used to fabricate and fuel an artwork. Arata prefers the works to be presented as image cells, as in a mismatched freeze-frame comic strip allowing content and context to be up-ended. 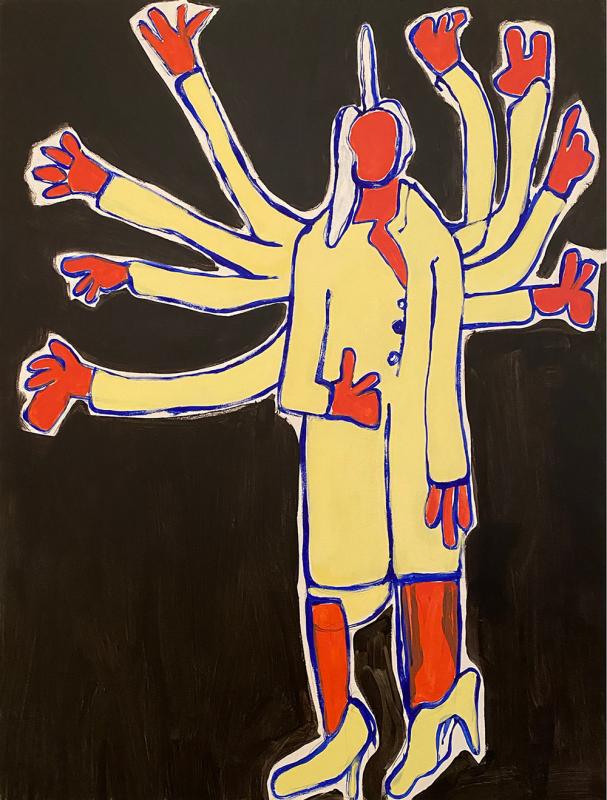 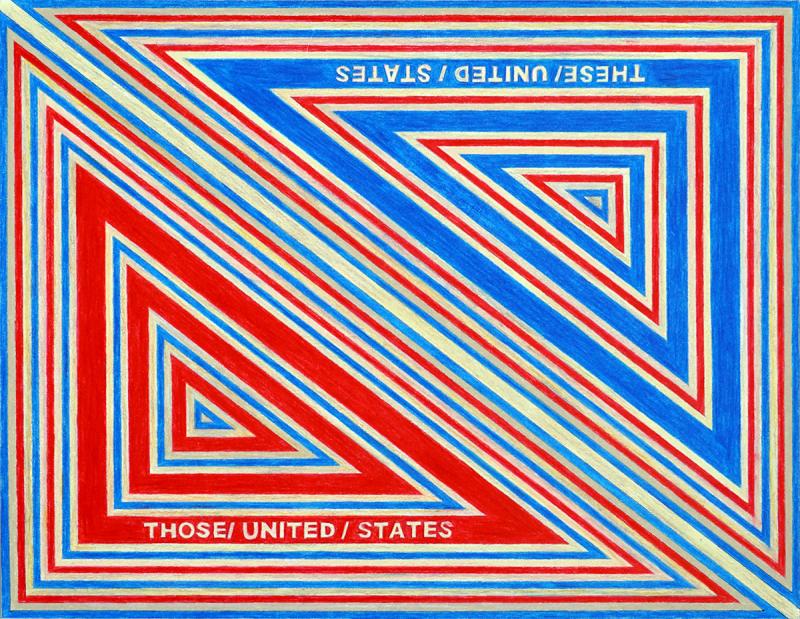 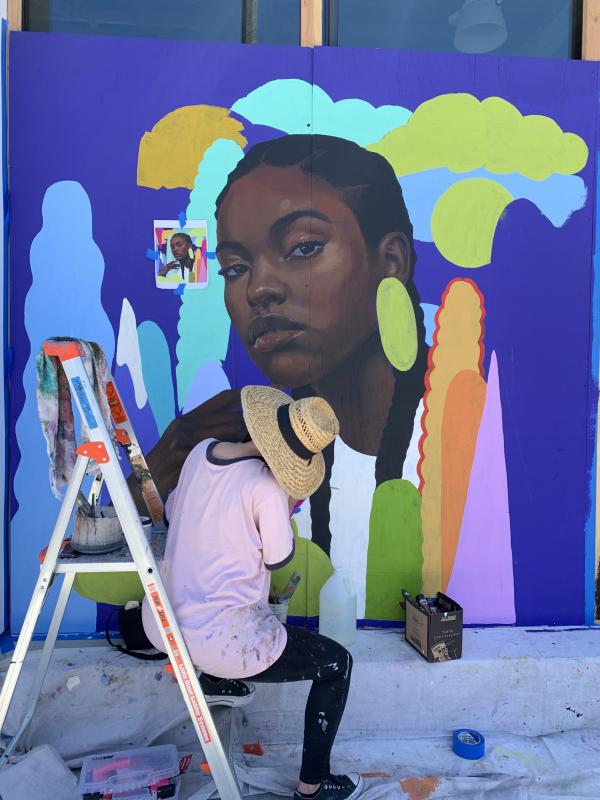 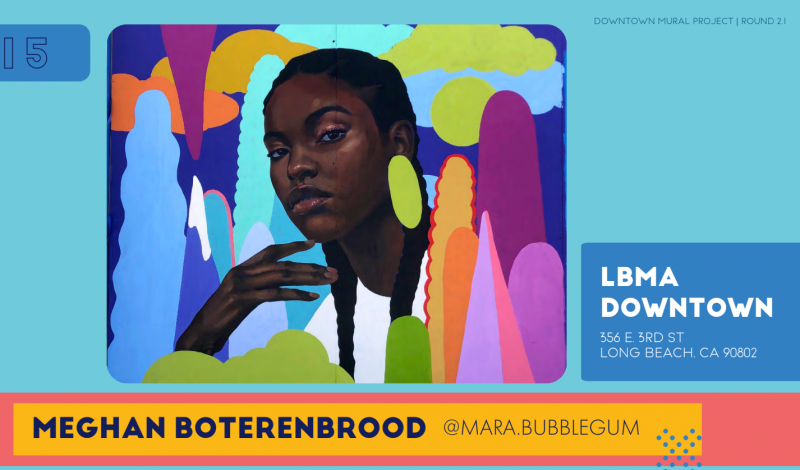 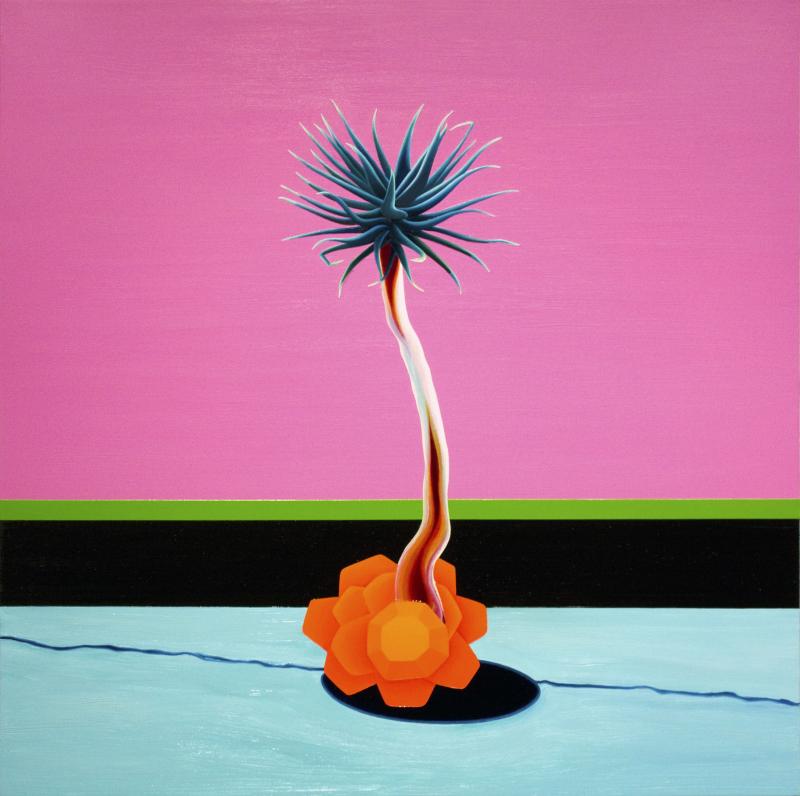