The Promise Pathways launched in the fall of 2012 with 933 students from LBUSD and significantly expanded in the fall of 2013 to include two additional districts (Bellflower Unified and Paramount Unified School Districts) and reaching 1325 students. In the fall of 2014, expanded further to include two additional districts (ABC and Los Alamitos Unified School Districts) and a private high school in Long Beach (Saint Joseph High School) with an anticipated cohort of more than 1500 students.

Promise Pathways students benefit from several innovations including alternative placement and first-semester success plans with registration priority. Participating students are placed in English and math courses based broadly on their high school achievement (e.g., HS GPA, last course, and grade in the discipline) rather than traditional standardized tests. Pathways students are also required to enroll full-time and to complete key foundational courses beginning in their first semester. 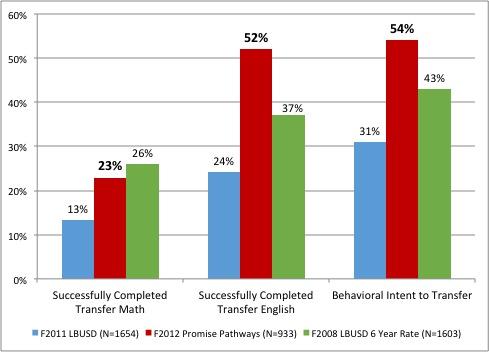 The Effects of Multiple Measures Assessment on Placement

Over the past few years, less than 15% of first-time LBCC students have assessed into transfer-level English while less than 10% of students have assessed into transfer-level Math.  In the past, this has been taken as prima facie evidence of students’ lack of readiness for college.  However, starting in 2011, LBCC began a program of research to test college readiness more directly by working to determine the best predictors of performance in college ready courses. 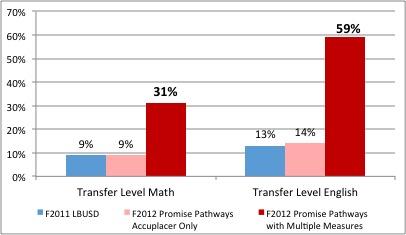 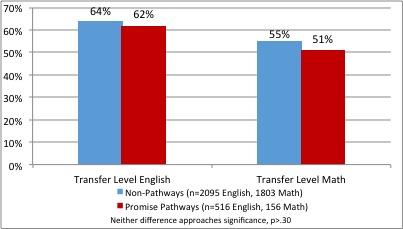 Importantly, despite dramatically expanding placement directly into college-level coursework, students succeeded in those courses at rates that were no different than students who had received multiple semesters of developmental instruction and had persisted through multiple years at the college (both typically strong predictors of higher rates of success), providing powerful validation of the multiple measures placement method.

Equity Effects of the Promise Pathways

As a result, access to and entry into transfer-level courses increased for all demographic groups.  Rates of achievement of these milestones increased for every demographic group, with some of the largest relative gains made by Latino and African American students.  In fact, in every case but one, the rates of achievement of these milestones by students of color in the Promise Pathways in 2012 matched and often significantly outpaced those of the highest achieving group in 2011 (indicated by the blue lines in each figure). 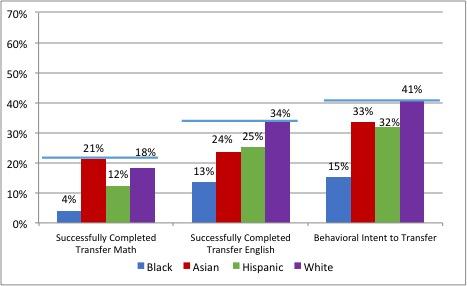 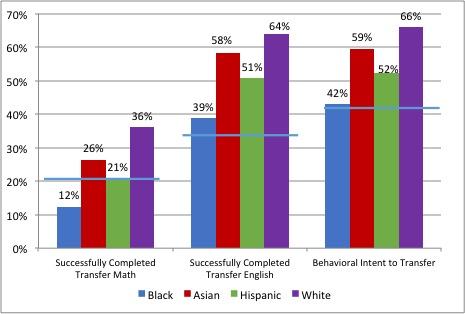 Recognition for the Promise Pathways

From the very beginning, the effort that the college has collectively put into the Promise Pathways program has received recognition and acclaim throughout the state and nationally.  As that effort has begun to bear fruit in the significant achievements summarized above, the college has been recognized with several awards including:

In addition, numerous colleges and organizations have begun to explore the potential of the Promise Pathways and the Long Beach College Promise as potential state and national models for how to meaningfully improve student outcomes amidst the many difficulties faced by today’s community colleges, either inviting the college to share its results or coming to visit the college, including:

Promise Pathways students also give the program very positive reviews. Pathways Students’ overall satisfaction level with the program is high, their general consensus was that the program improved from the first to the second semester, and they cite priority registration, First Semester Success Plans, and alternative assessment as the features which helped them the most.

In addition, LBCC continues to implement and experiment with several other pilot efforts to support Promise Pathways students. These include:

Additional Resources for Colleges and Organizations

From the very beginning, Long Beach City College has worked very hard to be both transparent about the results of the Promise Pathways and open to sharing the methods that we have used.  As early as late 2011, the college built a suite of tools that it freely released that would allow any California Community College to replicate its research and explore multiple measures assessment at its colleges.  Collaborating with the RP Group and the California Community Colleges Chancellor’s Office, this suite was further refined and additional support was given to any college that sought to perform the research themselves as part of the Student Transcript Enhanced Placement Study (STEPS).  These tools remain available for any community college or four-year college to use and adapt to improve placement at their college under an Attribution-NonCommercial Creative Commons License. This effort eventually formed the core of what is now Multiple Measures Assessment Project, which is building a statewide multiple measures data warehouse and placement tool for the entire California Community College system.

LBCC will continue to evaluate and improve the effort and provide assistance to other colleges in their hopes to do the same.  Copies of various internal reports and presentations are available for review in the column on the right.

Additional resources for institutions working to develop local programs similar to the Promise Pathways or the Long Beach College Promise can be found here.

If you have any general questions about the Promise Pathways or the Long Beach College Promise or about arranging additional opportunities to discuss the programs in greater detail, please contact the Outreach & Recruitment Office.

If you have any questions about the research conducted for or about the Promise Pathways or any suggestions for this site, please direct questions to John Hetts, Director of Institutional Research at jhetts@lbcc.edu or 562-938-4052.  If you would like to receive future updates about the results of the program, you can do so via email here.