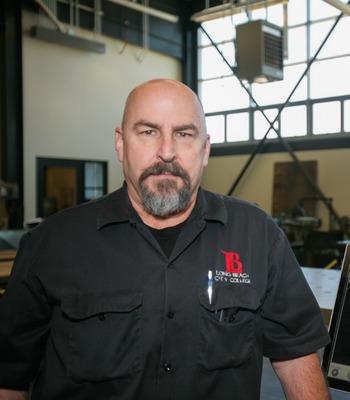 Damon Skinner has been a full-time instructor at Long Beach City College since 2016.  He previously taught for 11 years at the sheet metal workers apprenticeship, and 4 years at Long Beach City College in the evenings part-time.  Damon first worked in the metal trades as a 16-year-old summer apprentice at a local HVAC shop owned by a family friend.  Damon graduated from LBCC with an AS degree in welding and an occupational certificate in welding as well in 1986.  After leaving LBCC he was indentured into the sheet metal workers apprenticeship in 1986 and graduated the in 1990 with accomplishing 4 years perfect attendance.

After graduation from the apprenticeship, Damon continued working for a large architectural sheet metal company as a journeyman.  He rose to the level of superintendent prior to retiring in 2015 and continuing to teach part-time at LBCC.

Damon has taught layout, fabrication, welding, HVAC theory, and service work throughout his years at various schools.  If a student is a motivated learner, he will work tirelessly to ensure student success.  Damon is a past American Welding Society Certified Welding Inspector and Educator.

Damon is a lifelong resident of Long Beach and both his brothers are LBCC graduates and his parents are alumni as well.