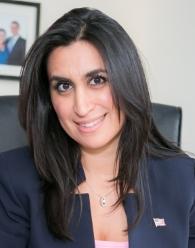 Sunny Zia is serving her second term on the Long Beach Community College District Board, having been elected Trustee for Area 3 in April of 2014 and then re-elected in 2018. She is a first-generation Iranian American who grew up in a hardworking family that raised her with the guiding principles of the American dream. From a young age, they instilled in her the importance of education as the pathway to success.

Sunny is a former small business owner and consultant to the private and public sectors. She has managed a wide range of programs, balanced budgets, and recovered funding for many agencies she has represented.

Currently, Sunny is a Senior Civil Engineer and Program Manager at the Port of Long Beach responsible for overseeing multi-million dollars in Capital Improvement projects. In her most recent role as the Port’s Contract Compliance Manager, she led the oversight of over $2.44 billion in contracting practices and ensured that contracting at the Port is fair, equitable and transparent. In this capacity, she led the effort in generating over $12.2 million in annual savings.

Sunny has been a leader in the non-profit and philanthropic communities and has led numerous humanitarian projects locally and globally. Her community work spans from working with at-risk youth, addressing hate crimes and bullying, overcoming poverty through micro-lending, refugee/immigrant resettlement, and support for job placement of veterans and other displaced Americans.

In her first term as a Trustee, she has successfully led the effort in:

As someone who has received scholarships and financial aid, she is living proof of the success of having access to affordable education. Her commitment is to invest in the City’s future by ensuring students’ success and focusing on making our student’s career and college ready.

She is best known on and off campus as the “Voice for the Voiceless”.