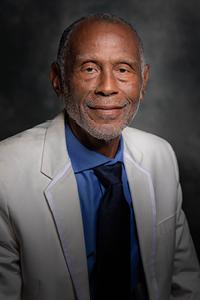 Malveaux earned his AA from LBCC in 1962 and was a decorated track star. He then went on the get his bachelor’s degree in Business Administration from Pepperdine University. He began booking future Grammy singer Thelma Houston in Long Beach and Los Angeles in 1964. He later promoted concerts, primarily in Long Beach, featuring legends such as Dizzy Gillespie, Big Joe Turner, Jackie Wilson, Jackie ”Moms” Mahley, James Brown, Marvin Gaye, Smokey Robinson, Etta James, Four Tops, and Martha Reeves & the Vandellas. He has been active in the Long Beach community for more than 40 years. Malveaux has been President of the Long Beach Central Area Association (LBCAA) since 1998. As president of the LBCAA, John has worked with the LBCC Foundation to support music scholarships for LBCC students. In 2009, Malveaux founded MusicUNTOLD, a non-profit arts education organization that promotes the arts through education, performance, exhibitions, and community outreach opportunities.