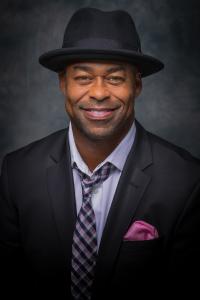 Givens graduated from Long Beach Polytechnic High School in 1989 and joined the US Air Force, where he served until 1993. Upon his return, he was given a camera by his parents, which prompted him to take a photography class at LBCC. That photography course at LBCC sparked his lifelong passion for capturing images of everyday people and was the start of Givens’ career as an award-winning photographer, documentarian, and social activist. He has photographed everything from album covers for his friend Snoop Dog to the day-to-day life in Long Beach’s 6th District. In 2019 he exhibited his work, Power of Choice, on the LBCC campus during Black History Month. This exhibit featured friends from Givens’ youth who became involved with drugs and gangs juxtaposed with community activists, professionals, and hometown success stories.  He has also been recognized by the US House of Representatives for his work to reduce gang violence. His most recent project, “Black Men Matter,” a single black-and-white photograph of hundreds of Black men standing proudly and united in black suits, was exhibited in Long Beach.